Seeing the Spontaneous Creation Through to Completion 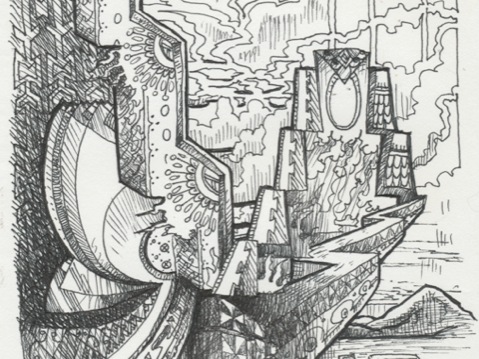 There’s much to be said for the value of doodling. I’ve probably even said a bit of it already. I think so much importance is put on the idea of ‘a finished drawing’ that it’s sometimes possible to loose sight of the looseness of the spontaneous flow. In fact, the specificity of a ‘finished drawing’ (as if it’s this grand eloquence) can cause one to over think what one is setting out to do.

When I make a drawing of a painting I’m going to create there’s a lot of, well, doodling that goes into those first intimations of the image. When an idea comes to me it’s never a fleshed out thing. It’s sort of like a big broad brushstroke over my mind that says ‘something like this.’ Then what follows is: a lot of scribbles, dashes and dots, lines and curves, of trying to understand my lines, my motives, my reasons for making it.

On top of that gets added the symbolism: the story around each thing and why it needs to be there. That is sort of an added layer on top of the experience of the thing itself. Deeper down – there’s simply a drive, a desire, a strong urge for the thing. And that, I think, is the thing to follow. Everything else becomes ‘too much thinking’ and only serves to subdue get us back into our heads and out of our… Everything.

This is where a looseness comes in – a softness in the approach (even if it’s fierce and visceral. No, especially if) and allowing of oneself. I think that, with every piece of art, there is an initial spontaneous experience of the thing: an inspiration, a flash, an idea – that broad brushstroke. The initial sketches that follow should seek to capture that spontaneity. Often, in those first explorations, it’s a bit of a blurred idea. It shimmers on the horizon of my imaginations. I am only just tasting it – getting the first hints of it. It’s like a new relationship – it’s so exciting. And I capture a curve, a composition, a sense of scale.

But then, with time and exploration, I get to know it. All it’s nuances and quirks. The places that don’t line up with my vision. The pieces that feel awkward and unaligned. Like a relationship, if we force it, it gets uncomfortable and it implodes. It doesn’t work. So we need to go at it with a measured grace, a sense of space, a softness, to explore the hows and whys of the thing and see if it doesn’t want to be – or is trying to be – something else all together.

Making Art is a relationship and when we get involved with it, there’s a need to allow it to be it’s own experience, it’s own expression, outside of what we want it to be. And it is difficult. Relationships aren’t easy to maintain. And making art is the same. It takes work, perseverance, and dedication. But the inspiration is the fact of what it can be, what it has been, and what we get out of it. It’s what keeps us going. It’s what keeps me going.

I’m not all that stoked with most of my paintings while I’m working on them. They are a mess! They are unfinished and coarse. It’s like we have to work through our stuff. But I’m patient with it. My early drawings for a piece tend to be haphazard, unclear, and, often, not quite right.

So one needs to be able to allow for looseness. For sketches to be just that – sketches, ideas merging into each other, and ourselves losing ourselves in the process. And then, of course, the trick is to carry that ‘losing yourself’ through the entire process: from sketch to drawing to painting.

What I’m getting at is that, when you are starting out trying to get an idea onto the paper: be patient! Allow yourself new drawings, experimentation, and exploration. Play with the basic dominant shapes before you try to tackle the details. Visualize the big picture… feel it out… then try drawing sketches of the dominant movements and ideas…

In any case, if you are in the midst of trying to get your idea out – your feeling – your visions – and they aren’t quite right: don’t give up! Breath! Be patient! There’s no retreating from that edge!